In 2020, the motorcycle export market will fluctuate. Where will the export-oriented enterprises go?

At the beginning of the global COVID-19 epidemic, the demand and sales of bicycles, electric vehicles and motorcycles in Europe, America and Southeast Asia have surged. Everyone feels that the export-oriented motorcycle enterprises are ushering in a new round of explosive growth. However, the fact is cruel. The motorcycle sales in the first half of this year are not good. From January to March 2020, China's motorcycle exports reached 3.29 million units, a year-on-year decrease of 750000 units, or 18.6%. Although the sales volume increased from April to June, there was still a double-digit decline compared with the same period last year.
In the first half of the year, the top ten export motorcycle enterprises were Dachangjiang, Longxin, Yinxiang, Zongshen, Lifan, Xindazhou Honda, Dayun, Guangzhou Haojin, Daye and Luoyang North. The ten enterprises exported 1694600 units, accounting for 61.16% of the total motorcycle exports. Among them, the best performers are Dachangjiang and Daye. There are more than 300000 Dachangjiang vehicles, basically the same as last year. Daye has exceeded 100000 vehicles, with a growth rate of nearly 40%. 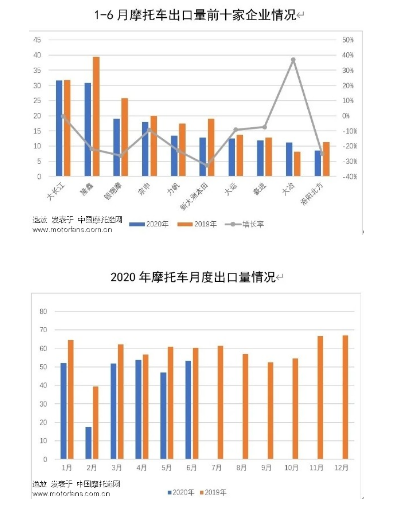